April 21, 2018
In any democratic society, basic education prepares its younger citizens for civic engagement. The election process is one of the most important elements of democracy. For elections to be successful, voters need to be knowledgeable of both candidates, mainly their qualifications, their issues, their stands, and their proposals. This is what democracy needs. In the Philippines, it seems that the mere shading of ovals in an election ballot is already too much to ask. The threshold placed by those who are reviewing the vice presidential election results is already low, fifty percent. Vice president Robredo is asking for less strict rules in the threshold of shading of ovals. 25 percent shaded should be enough, according to Robredo. Is it really true that Filipinos are so incompetent that they cannot fill those ovals properly? Over so many years, millions of children, starting in the elementary years, take standardized national exams. These exams use answer sheets that are far more complicated than election ballots:


Children are taught that in these exams the answer must be fully shaded. Fifty percent shading is unacceptable. Children take these several times on several subjects. One could only hope that after finishing high school, students would already have mastered how to fill scannable sheets. The Commission on Elections also does not fail to remind voters how ovals or circles should be shaded. These instructions are made available to all. 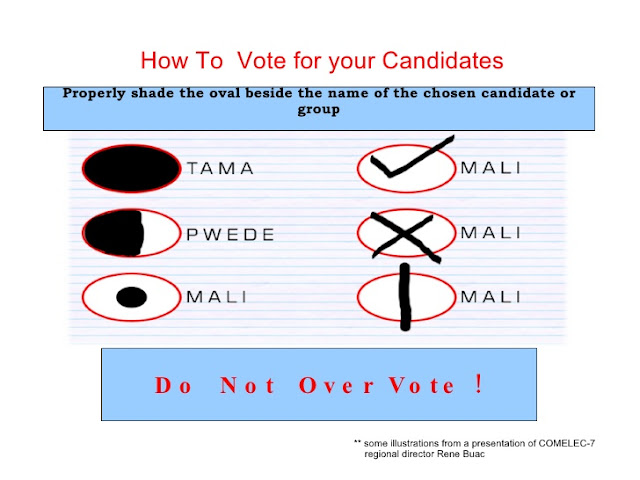 The major difference is that we seem to expect less from adults than from children as 50 percent shading is apparently good enough. What Robredo is asking is worse.

Is the Philippine basic education system so bad that filling ovals or circles completely becomes an impossible task. Robredo seems to imply that. Results of National Achievement Tests are indeed not stellar but I highly doubt that this is because students do not fill those sheets correctly. Someone who only fills the oval 25 percent obviously cannot follow a simple instruction. Thus, it is really a choice between these two: Philippine basic education has even failed to teach children how to shade (eventhough it apparently succeeds in teaching children how to write letters and numbers), or these ballots are not genuine and therefore should not be counted. Robredo should be asked to pick from one of these two choices.