DepEd Will Be Building Classrooms

January 05, 2017
For the past six years, the budget for building classrooms in the Philippines has been rising every year. Yet, classroom shortages still exist. The image of about sixty second grade students cramped inside a former toilet as they listen to their teacher Leonora Jusay remains, even with billions of pesos assigned to alleviate the overcrowding of schools in the country.

The amount of money supposedly assigned to building classrooms has continued to rise for the past six years: 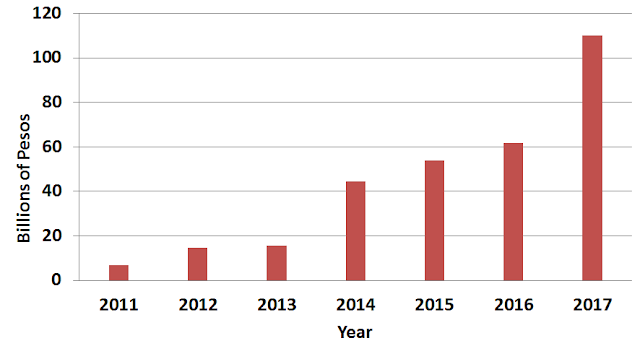 With the seemingly endless budget allocation for classrooms, why do classroom shortages persist? This was the same question asked by Rep. Tinio back in 2015:

And his own response to his question is: "...while the DepEd was given a big budget to eliminate classroom shortage in the country, the actual construction of these classrooms remains slow."

The budget for 2017 provides the biggest for classrooms:

The above news comes with a statement from current Deped secretary Briones "pledging to address the issue of delays in the construction of school buildings, citing the single design as one of the reasons".

Briones is probably wrong. One can figure out the real reason behind the delay in the construction of school buildings by looking at where classroom shortages are. Overcrowded classrooms are found in urban centers where there are really no available lots for new school buildings. Of course, there are other reasons since we continue to see dilapidated classrooms badly needing renovation. There is corruption and inefficiency and "the single design" reason is simply frivolous.