January 22, 2017
The following is an excerpt from US President Donald Trump's inaugural speech:


We've made other countries rich while the wealth, strength, and confidence of our country has disappeared over the horizon.
One by one, the factories shuttered and left our shores, with not even a thought about the millions upon millions of American workers left behind.
The wealth of our middle class has been ripped from their homes and then redistributed across the entire world.
But that is the past. And now we are looking only to the future. We assembled here today are issuing a new decree to be heard in every city, in every foreign capital, and in every hall of power.
From this day forward, a new vision will govern our land.
From this moment on, it's going to be America First.

Years ago, the southern island of the Philippines, Mindanao, was celebrating graduates of the Job Enabling English Proficiency (JEEP) Program:

As noted in the above article, "JEEP is a two-year non-degree English language proficiency project of the USAID’s Growth with Equity in Mindanao (GEM) program, in partnership with WMSU and 25 other colleges and universities in Mindanao. It aims to increase the graduates’ employability in industries that require English language proficiency particularly in such growing sectors as nursing, hotel and restaurant services, tourism and travel, maritime, and business process outsourcing."

Two members of Congress asked USAID to stop the program in 2012. The Guardian reported, "The Job Enabling English Proficiency (Jeep) programme, which has provided English classes to up to 5,000 university graduates on the religiously divided island of Mindanao since 2009, was suspended last month after congressmen Tim Bishop and Walter Jones accused USAid's chief, Rajiv Shah, of "investing taxpayer dollars in outsourcing training programmes in the Philippines at the expense of American workers."

While considering a similar program in India, Matthew Yglesias at ThinkProgress made the following remarks in his article Hard to Avoid Boosting Outsourcing:


I don’t want to defend this specific program in specific detail, but the point is that any efforts we make to improve public health, infrastructure, or education in a poor foreign country is extremely likely to lead to an increase in the number of for-profit firms taking advantage of new opportunities to source work to low-wage locales. Personally, I’m fine with that. I believe borders should be open to the flow of goods, services, and people and look forward to continued increases in India’s level of prosperity. But I think there’s a problem here for trade-skeptics. Unless we close our borders to trade, anything we do to help poor countries improve their productive capabilities will lead to more trade and more outsourcing.... 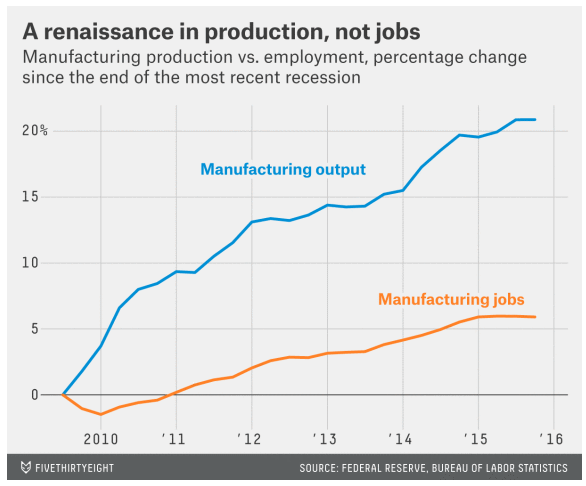 
"Technological change disrupts labor markets and can hurt individuals whose skills are substituted by technology, because they often do not have the skills required in many of the new jobs," according to the World Bank report on the digital state of the world. "Even for those who stay within the same occupations, jobs will be transformed, requiring modern skills. The speed of these changes appears to be accelerating, intensifying creative destruction and the pace of labor market changes."

It is indeed easy to say "America First", but apparently, it is more difficult to state the truth. The US lost jobs and those jobs were lost because of technology. Those jobs are gone forever and it has nothing to do with how we help developing countries.