When Should the School Year Begin and End?

January 21, 2014
The school year is currently under review in the Philippines. Moving the opening of school has been catalyzed by the expected integration of the Philippines with the other members of the Association of South East Asian Nations (ASEAN) in 2015. The rationale is purely based on synchronizing with the rest of the region to enhance both student and teacher mobility among member countries.

I finished both basic and college education in the Philippines before heading to the US for graduate studies. Finishing the school year sometime in late March or early April means a slightly longer vacation since school starts in late August or early September in the US. School ends in late May or early June implies that someone coming to the US to study in the Philippines needs to settle with only a few weeks of summer vacation. With teacher training sessions, even with a lack of synchronization among countries, it is still however possible to find a week or two during which no country has school days.

Although the Philippines stands out among ASEAN countries with regard to the scheduling of the school year, there are countries in Asia or other parts of the world that do not have a September to May school year. Here are some examples (from World Stats and Facts):


By the way, schools in Indonesia (a member of the ASEAN) actually have eleven months (from July to June) of schooling. Nevertheless, as long as the school year lasts for only ten months, synchronization to enhance student and teacher mobility is not a difficult issue to solve. Adjustments can easily be made. More importantly, a country should choose when its school year starts and ends based on conditions the country faces. Although the northern and southern hemispheres experience the seasons at different times, schools tend to hold their breaks during the summer season. The US, which is in the northern hemisphere, has its school break over the summer months July and August while students in Australia takes a vacation during its summer months of December and January. Summer months in countries where bitter cold weather occurs in the winter months are indeed excellent opportunities to spend time outdoors and with family. Summer months are better times to travel and have a vacation. In the Philippines, the months of April and May, during which there is no school, are the hottest and driest months of the year. Without air conditioning or even electric fans during the summer months in the Philippines, classrooms are expected to be very hot and therefore expose school children to heath risks, not to mention very poor learning environments. Even colleges do not have air conditioned classrooms. The Philippines should therefore not adjust its school schedule for a flimsy reason of synchronization if in exchange, students and teachers will only be burdened.

The rainy season brings flooding. Quite a number of typhoons visit the Philippines during the months of September through December. A major flood in the Metro Manila area is perhaps not a good way to start school. Japan is quite creative in its school year. This perhaps is a better place to start thinking about the school year. Schooling in Japan is almost year round. There are no long breaks. Therfore, one idea is to have the first term of school over the months of November through March, a break in April, then a second term over the months of May through September. This scheme distributes the school closings over a period of very hot days in one break and very rainy days in another. In addition, the breaks have been distributed reducing the number of continuous days of no school. It allows for two periods over the year during both teachers and facilities can take a breather from students. Periodic cleaning and maintenance of schools can therefore be done twice a year. But most importantly, avoidance of a long break from school addresses a real problem in learning: Summer Learning Loss.

Harris Cooper of Duke University and his coworkers have shown that summer vacations lead to learning gaps. Among their published works are the following:

The following graph from Cooper et al. illustrates how much learning loss occurs over the summer: 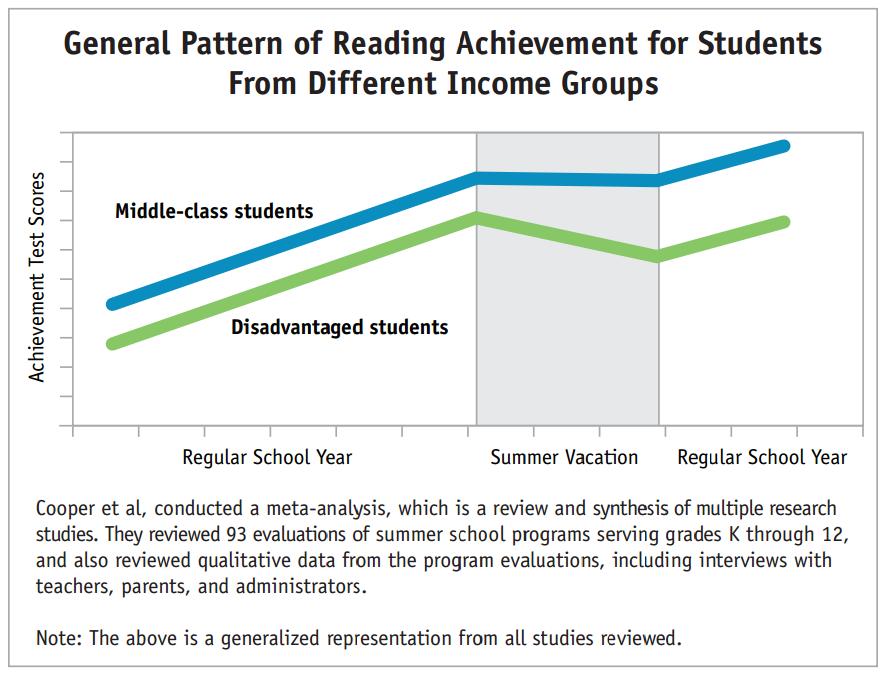 Over the summer, poor students lose more. The situation for math is worse. Unlike reading where a family may be able to make up for what a child is missing from school, math exercises are not really household favorites. Idleness becomes worse with time. Breaks are necessary, but long ones can be detrimental.