The Cost of Testing

January 04, 2014
Tests serve a very good purpose in education. Tests assess how much students have learned. Tests come in various kinds. There are take-home tests in which time is not a factor. These tests usually allow students to look up information. There are "open-book" exams given inside a classroom. These begin to be under time pressure and students need to seek information from the text readily and familiarity with the book is an advantage. There are essays. In math and science, there are numerical problems. There is also the multiple choice exam. Standardized tests are usually of this type since these are much easier to grade. Multiple choice exams do not give room to the subjectivity of a grader. Good multiple choice exams, however, are much more difficult to write. With regard to style and content, a test can be either tailored to assess how quickly a student could retrieve information and answer the question. These tests factor speed. On the other hand, exams can be written such that there is really no time pressure but the questions are so much more difficult. These exams examine the depth of a student's knowledge and skill. Tests are useful not simply as an assessment tool, but also as a motivation factor. Students do take their work in school more seriously if there are tests.

While it is clear that tests are important, there is now an impression that tests are bad for education. There is, for example, that derogatory phrase "teaching to the test". Looking at any sport, a beginner learns the rules then does some practice. Playing the game is the test and here it is clear, one must be taught the test in order to learn the game. If tests in schools reflect and represent what students must learn then "teaching to the test" is in fact teaching correctly. Unlike sports, however, the objectives of education are not as focused. Schools are supposed to prepare children for so many things like life itself. Thus, there are the skills like collaboration, perseverance and creativity that are quite difficult to measure by tests. Thus, a focus on tests may neglect these very important skills.

High stakes testing dramatically changes the role of exams in schools. When teachers' pay and the survival of a school are dependent on exam scores, the role of exams in education can change so much such that tests can do harm to schools. “Testing More, Teaching Less: What America’s Obsession with Student Testing Costs in Money and Lost Instructional Time,”, a report released by the American Federation of Teachers presents data from two "anonymous" school districts showing how much money and time are being spent on testing:

The following figures summarize the time and money spent on testing by an "Eastern" school district: 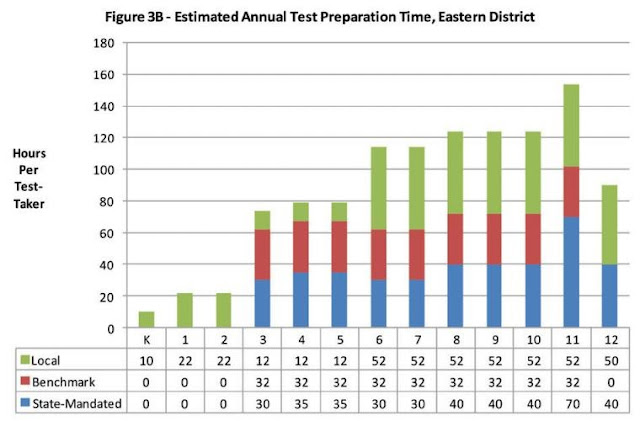 The American Federation of Teachers states the following in the press release announcing the report:


Redirected time and money devoted to excessive testing could be used, for example, to focus on problem-solving and critical-thinking skills and to restore subjects not tested and/or that have been cut, such as art, music, physical education and foreign languages. The financial savings could be used for any number of instructional needs, including the purchase of assessments aligned to the Common Core State Standards. These assessments will cost between $20 to $35 more per test-taker than the current $20 per test-taker in a typical state, the report said.

Tests are good for schools, but we can make exams bad if we use them for a different purpose.