August 26, 2019
Horace Mann, one of the first great advocates of public education, wrote in 1848, "Education then, beyond all other devices of human origin, is the great equalizer of the conditions of men, the balance-wheel of the social machinery." As pointed out by Adam Harris at the Atlantic, there are "schools that are bringing poor kids into the middle class". I guess it is easy to cite a particular instance in which a child born in a low socio-economic family is able to climb up to a higher income bracket later in life. And in most cases, this feat is indeed made possible by education. Unfortunately, anecdotes are often exceptions to the rule. Citing one or two or even a hundred cases is not enough evidence to show that schools are indeed equalizers. Recent research demonstrates that schools in the United States are in fact not equalizers.

Without looking at the evidence, it is tempting to hypothesize that schools are great equalizers if one assumes that inequity is much smaller inside a school environment than in a non-school environment. The following figure in the journal American Sociological Review illustrates this assumption:

Public schools serving as great equalizers, after all, is an ideal. And in the real world, we need data to figure out whether we are fulfilling this promise or not. Addressing the question of whether schools are serving as equalizers is confounded by the fact that children entering school for the first time are already of greatly varying school readiness and abilities. Recent research shows that depending on how one measures learning, one can either say "yes" or "no" to the question, "Are schools equalizers?" 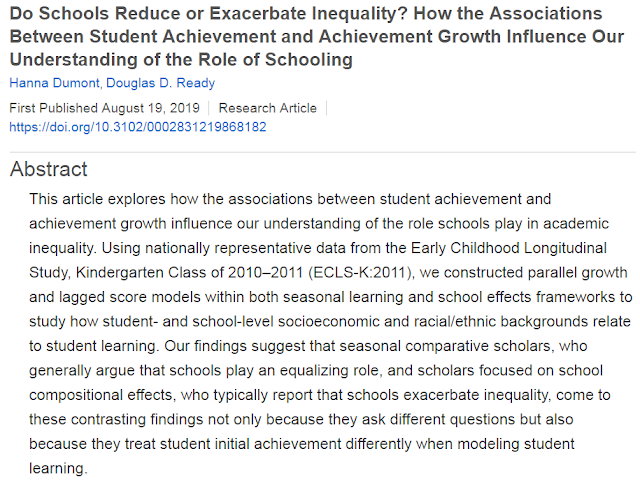 So apparently, it depends on how we ask the question and how we model the data. To bring clarity to this question, I go back to the older paper of Downey et al. This paper is an example from the seasonal comparative scholars and yet, they find that the black-white gap is increasing during the school year and not over the summer months.


And the most recent work by Dumont and Ready sees the same trend:

For racial/ethnic inequalities, the findings were more consistent—and more consistently troubling—across modeling strategies. Both approaches indicated that Black/White inequalities in reading skills worsened somewhat during the first and second grades, and the lagged score approach suggested that the inequalities grew slightly wider during kindergarten as well. But what is perplexing—and completely counter to the “schools as equalizers” viewpoint—is that in no model did Black/White inequalities grow wider during the summer months. Indeed, the growth models even suggested that Black students may have learned more than their White peers during the summer after kindergarten.

Are schools equalizers? Clearly not. This suggests that school environments are not as homogeneous as we thought they are. And Tanner Skenderian, a student from Weston, Massachusetts, one of the wealthiest towns in the country, sums it up, "We're very fortunate that we're rather affluent. We have more opportunities, more technology, more classes and more teachers."


Education for All equity in education poverty