What Not To Do in Character Education

June 23, 2018
Back in my grade school years, there was a subject called "Character Education". It was often the subject that had my lowest grade. While my grades in math, language, science and social studies were in the nineties, I usually ended with seventies in "Character Education". Apparently, I did not appear to my teachers as someone who would comply always with rules and demonstrate good manners and right conduct. Perhaps, I was indeed causing trouble. After all, my parents were called once because I exhibited vocal opposition to home economics projects that I thought were simply being used as opportunities to take money from us. I probably did not appreciate the importance of just saying, "I am fine" when asked "How are you?" because I wanted to have a real conversation. While we were being fed with outward signs of politeness, I did not feel acceptance nor even a slight accommodation for being poor and athletically challenged. The current curriculum for basic education in the Philippines now includes a subject called "Edukasyon sa Pagpapakatao" (Values Education), yet there are recent calls made for an increase in teaching "good manners and right conduct" to young pupils. 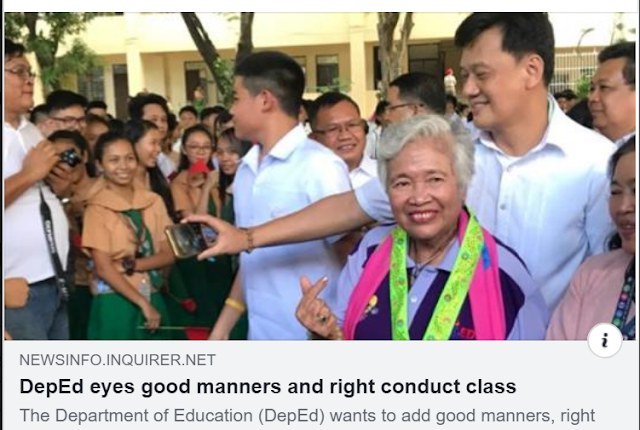 Character education is indeed important in basic education. The big problem is not doing it right. Back in 2001, a group of character education advocates wrote an article in Education Week entitled "What's Right and Wrong in Character Education". The article starts with the following:


We are advocates for character education. We believe that it is essential to students' future success and also to a healthy, humane society. And so we are heartened that character education is now getting its due, after decades of being slighted. But we are concerned about, and critical of, what many are doing in the name of character education. Well-intentioned as these efforts may be, we believe that they will make little difference for students, and thus may soon discredit the entire field. Moreover, they can easily distract us from what really matters in helping students become caring, principled, and responsible adults.


It should be obvious that we need to pay attention to the above ineffective ways of teaching character education. Otherwise, we would not be too fixated with foul-mouthed heads of state. 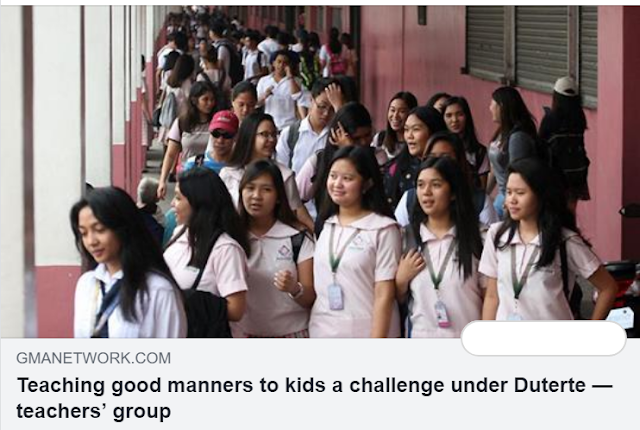 In fact, we should be more concerned with how we, in front of our children, respond because according to research, this is what our children copy. Another study in fact highlights how character is indeed influenced significantly at home:

Using a large representative sample from Belgium, this study demonstrated that levels of prejudice are family dependent: children with prejudiced parents were more likely to be prejudiced themselves. This is particularly true with respect to parents’ and children’s general dislike of out-groups, which were associated with parent–child similarity in ideological attitudes. Finally, discussing politics at home signiﬁcantly facilitated the correspondence between parents and children, suggesting that children have actively learned parental predispositions instead of blindly copying their attitudes and behaviours.

It is not what Duterte or Trump would say or do. Rather, it is what we do or say in front of our own children. But schools can help in "Character Education". The Education Week article does come with suggestions that are based on evidence:

So what does "work"? Most fundamentally, schools must engage and inspire students' hearts as well as their minds, and this requires that schools get better at meeting students' basic, legitimate needs—their needs for safety, belonging, competence, and autonomy. A solid body of research shows that human beings are disposed to affiliate with those who meet these basic needs, and students will bond to a school in the same way, and for the same reasons, that infants bond to mothers who capably provide for them. In other words, students will care about a school's goals and values when that school effectively cares for them. Moreover, when they feel connected to a school and the people in it, they learn better.

Schools to be effective must copy the relationship between parents and their children. It must imitate the environment found in homes that are found to be conducive in inculcating either prejudices or values in children. Specific activities are provided for fostering good character:


· Class meetings in which students, with the teacher's help, get opportunities to set class goals and ground rules, plan activities, assess their progress, and solve common problems.

· Ethics-rich academic classes in which students go beyond facts and skills to consider the moral and social implications of what they are learning, most obviously in social studies and literature, but also in the sciences and the arts.

· Cooperative learning groups in which students collaborate on academic tasks and have regular opportunities to plan and reflect on the ways they work together.

· "Buddies" programs that regularly bring together whole classes of younger and older students to work one-on-one on academic, service, and recreational activities.

· Inclusive, whole-school events involving students and their families at school in ways that capitalize on their diverse backgrounds and personal experiences, such as "family heritage week" or a "family hobbies fair."

· Service-learning opportunities inside and outside the school that enable students to contribute to the welfare of others and to reflect on their experiences doing so.

Good manners and right conduct can be superficial. Character is so much deeper that it requires su much more than lip service.