What Do My Grades Really Mean?

March 15, 2017
Going through school, we really have learned the ABC's. And I am not talking about the alphabet. I am talking about the letters commonly used for reporting our grades. Based on these grades, we are able to compare ourselves against each other. With grades, we leap into labeling each other as either "good" or "bad" student. We even go further by comparing grades we obtain in one subject against another subject. I got an 'A' in math but only a 'D' in reading so I must be 'smart' in mathematics. We have even gone to the far end of equating grades as requirements to either enter an exclusive school or getting a job. In reality, the letter grades do not really mean that much. An 'A' in math does not really tell us what a student has learned. Math is too broad of a category and unless we have access to the quizzes, exams, homework, and other tools that are incorporated in this final grade, we really cannot tell how much a student has learned. It is perplexing that we have basically equated grades to our identity, allowing these letters to shape who we think we are.

In basic education, there is indeed a need for a teacher to communicate to the parents how a child is progressing in school. This communication needs to be concise but also meaningful. My children currently attend martial arts classes at Master Dietrich's Karate in Burke, Virginia. Dietrich encourages his students to bring and share their report card. It is part of a "black belt attitude" training. Sharing report cards whether these are exemplary or not is important for a family, for a community. For bringing a report card, Dietrich gives an "attitude" stripe and when a student earns a new belt, the student that has the most "attitude" stripes receives a trophy.

Dietrich pays close attention to the first part of the progress report. An example is shown below: 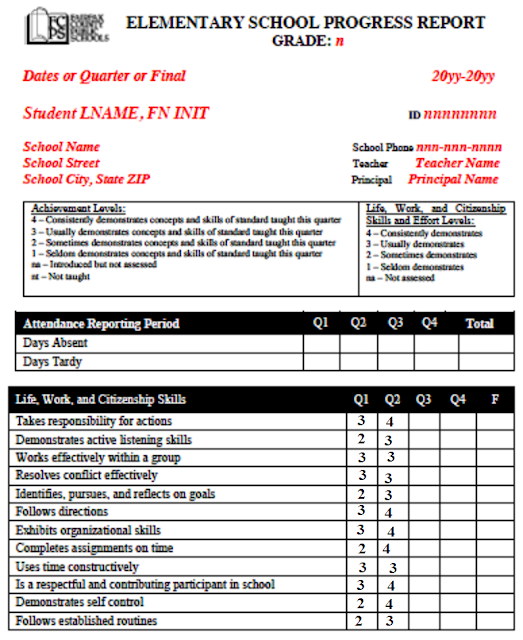 The report uses a numerical scale:


The above report card is an example of Standards Based Grading. First, it highlights the fact that each student is an individual learner. The marks are not cumulative and are not expected to be averaged. The students’ grades are representative of the student’s progress at the time the teacher writes the progress report. What is being graded is also made very clear. For each subject, this is likewise transparent. For instance, the following is an example for mathematics:

Surprisingly, Dietrich's Karate also works on a Standards Based Grading system. There are no "ABC's" or "123's" that need to be averaged. To advance, a student must demonstrate a technique that has been recently taught.

Standards Based Grading is evidently a more meaningful and understandable way of communicating a student's progress in school. It has also been shown to have "both higher correlations and higher mean scores and grades across the overall population and sub-groups" in a Colorado study. This is one area where the Department of Education in the Philippines is obviously way behind. While the new K to 12 curriculum is touted as "learner-centered, inclusive, developmentally appropriate, relevant, responsive, research-based, culture-sensitive, contextualized, global, constructivist, inquiry-based, reflective, collaborative and integrative", it still clings to the traditional grading system:

The traditional grading system is really a facade. It does not really inform us of what a child has learned. All these grades do is to destroy the growth mindset that is necessary for students to thrive. Furthermore, it allows parents to compare their children against other children using a meaningless basis. It also teaches students to compare themselves against each other. It teaches nothing but wrong.