How We Misunderstand Inquiry Based Learning

February 22, 2017
Inquiry-based learning is of course the foundation of doctoral work. One learns strategies not just content as one formulates new and important questions, collects data and makes observations to answer these questions, and in the process, advances human knowledge. For this reason, success in graduate school is weakly correlated with an undergraduate's academic record or scores in standardized exams. Inquiry-based learning requires a great deal of motivation, discipline and independence. Obviously, inquiry-based learning when mentioned as part of basic education is not exactly how a doctoral student works on his or her dissertation. Nonetheless, inquiry-based learning in either elementary or secondary education still requires motivation, discipline and independence. And similar to graduate school, one would expect that doing well in inquiry based-learning is often not correlated with a child's current academic performance.

Inquiry-based instruction is often found as a common model for advanced academics programs in the United States. One problem is that people tend to equate these programs with doing well in school. To see the difference, one can compare a traditional classroom with online learning. Students who do well inside a traditional classroom are not necessarily going to perform well in an online setting. Online learning, similar to inquiry-based instruction, requires motivation, discipline and independence. A student who does well in a traditional school does not necessarily have the motivation, discipline and independence required to learn on his or her own.

Inquiry-based instruction does go deeper than direct instruction. And in more than one way (after all, this is how doctoral students learn), inquiry-based learning is regarded more highly. However, by its very nature, inquiry-based instruction is not as generally applicable as traditional instruction because of the level of motivation, discipline and independence inquiry demands from a student. Not every straight "A" student is expected to thrive in an inquiry-based classroom. Conversely, there are students who have learning disabilities that can do well in such a setting. Thus, it is a gross misunderstanding for education policy makers in the Philippines to craft its new K to 12 curriculum as inquiry-based:

It is absurd to suggest that inquiry-based approaches will work for all students all the time. In an interview of six high school teachers from Canada and the United States, Oppong-Nuako and coworkers found that what teachers often employ is a mix between direct and inquiry-based instruction. 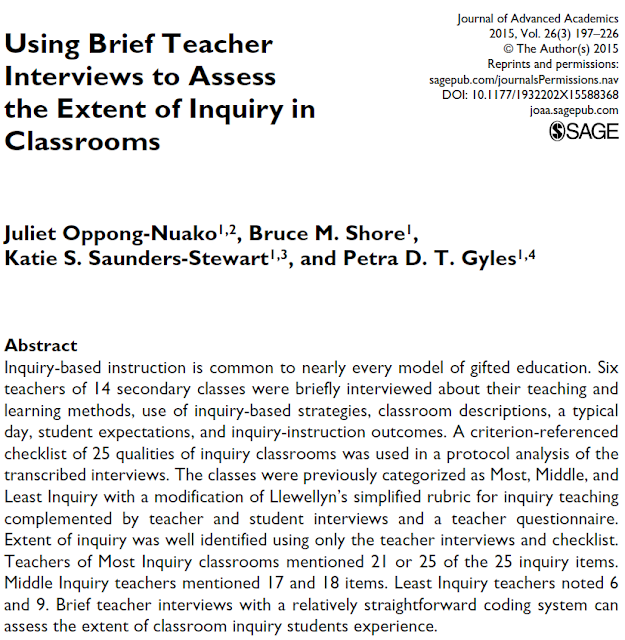 What is very surprising is that the least inquiry teaching is observed in science and math classes. Most inquiry classrooms are found in English classes. Science and math are both dominated by direct instruction, which again rans opposite to the Philippines' DepEd K to 12 curriculum, which states:


As a whole, the K to 12 science curriculum is learner-centered and inquiry-based, emphasizing the use of evidence in constructing explanations.

Commentaries Discovery Based Learning Education for All