April 29, 2014
There is a correlation between the income level of a family and graduation rates. In a previous article posted on this blog, "Functional Literacy and Out of School Children in the Philippines" the following data from "Why are some Filipino children not in school?" have been highlighted:

The following figure also brings out the striking correlation between poverty and not graduating:

The above shows the situation in the Philippines. One may be surprised to see that such correlation also exists in the United States. It is surprising because the United States unlike the Philippines has Title I of the Elementary and Secondary Education Act of 1965. (Financial Assistance To Local Educational Agencies For The Education Of Children Of Low-Income Families). The United States also has a nationwide School Breakfast Program and a School Lunch Program. There is also Head Start, a federal program that provides early childhood programs for low-income families. Title I and these programs aim to provide additional resources to schools that serve children from low income families. Thus, it is interesting to examine what the current situation is in the United States. Here are the most recent data from "Building a Grad Nation: Progress and Challenges in Ending the High School Dropout Epidemic" : 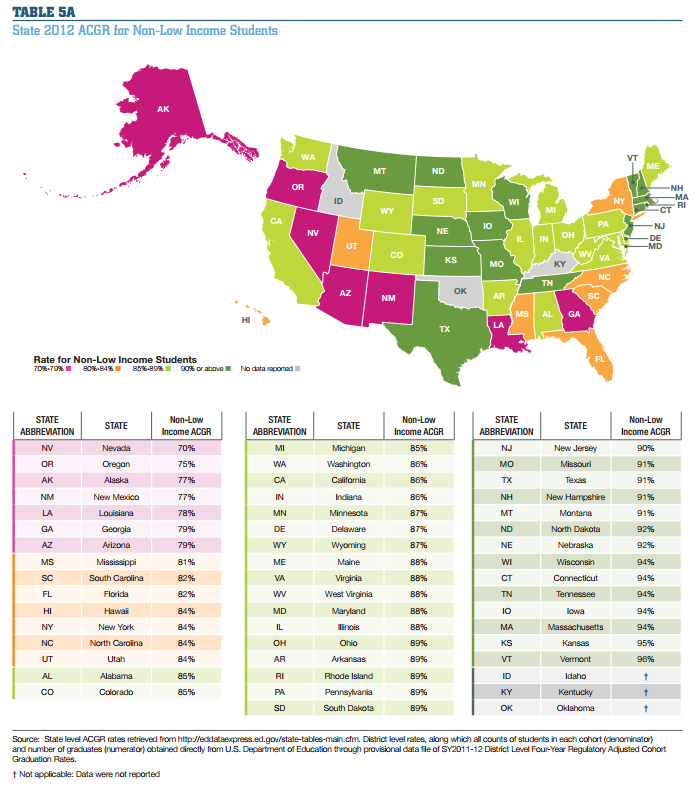 The problematic states in the above map are pink in color. These are states where the high school graduation rates for non low-income students are still below 80%. Quite a number of states have already reached 90% graduation rates for children who are not experiencing poverty. Massachusetts, for example, has 94%. The situation is dramatically different for poor children: 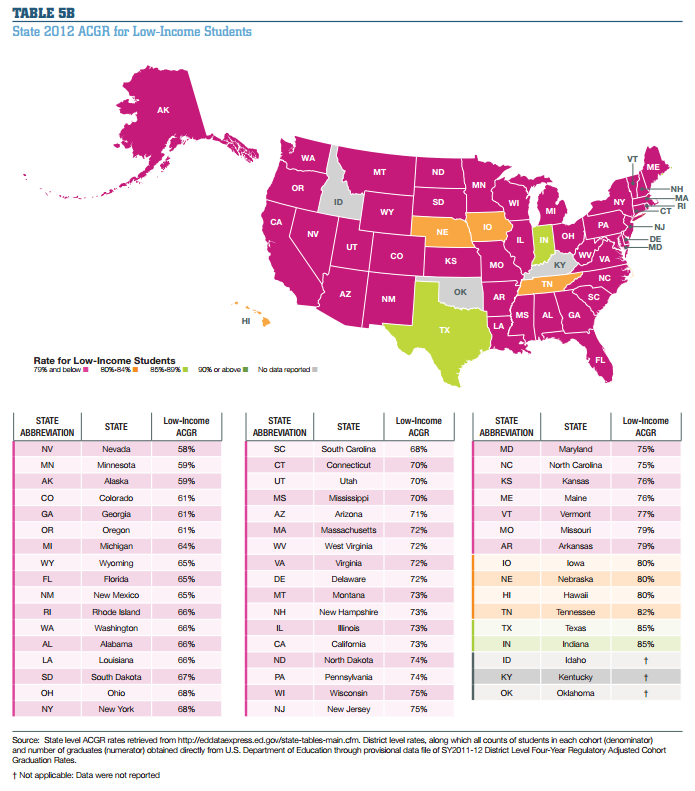 Almost every state in the above map is pink and eighteen states are seeing below 70% of their poor children graduating from high school. The situation looks grimmer with students with disabilities: 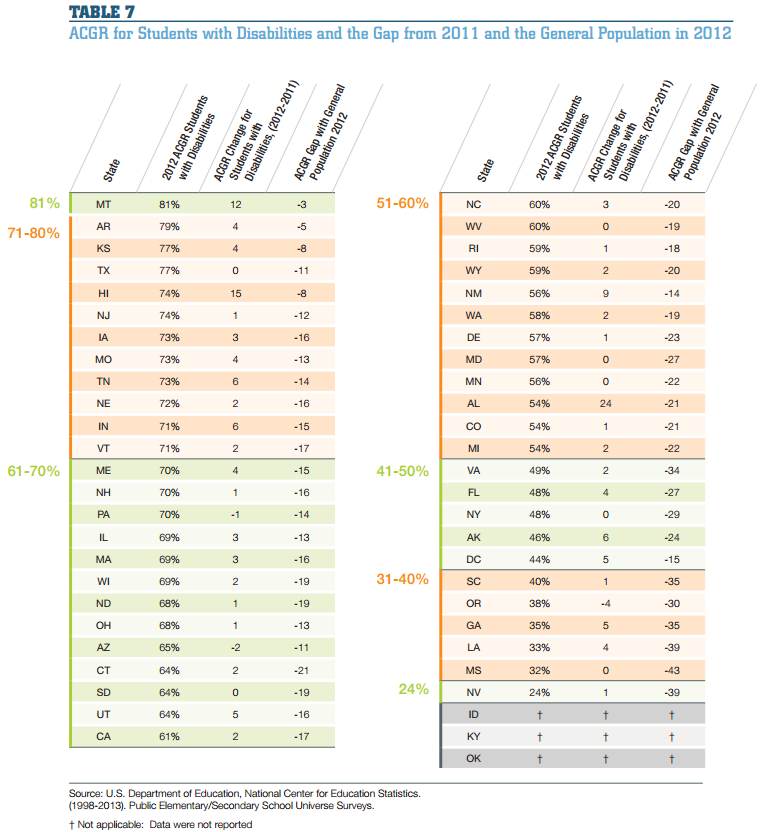 Only a third or less of students with disabilities in Louisiana, Mississippi and Nevada are able to finish high school. Are the government programs in the United States not working? The programs mentioned above do have a positive effect on poor school children and those with special needs. The problem lies in a shift in emphasis on education reforms. The report, Poverty and Education: Finding the Way Forward, points out the following: 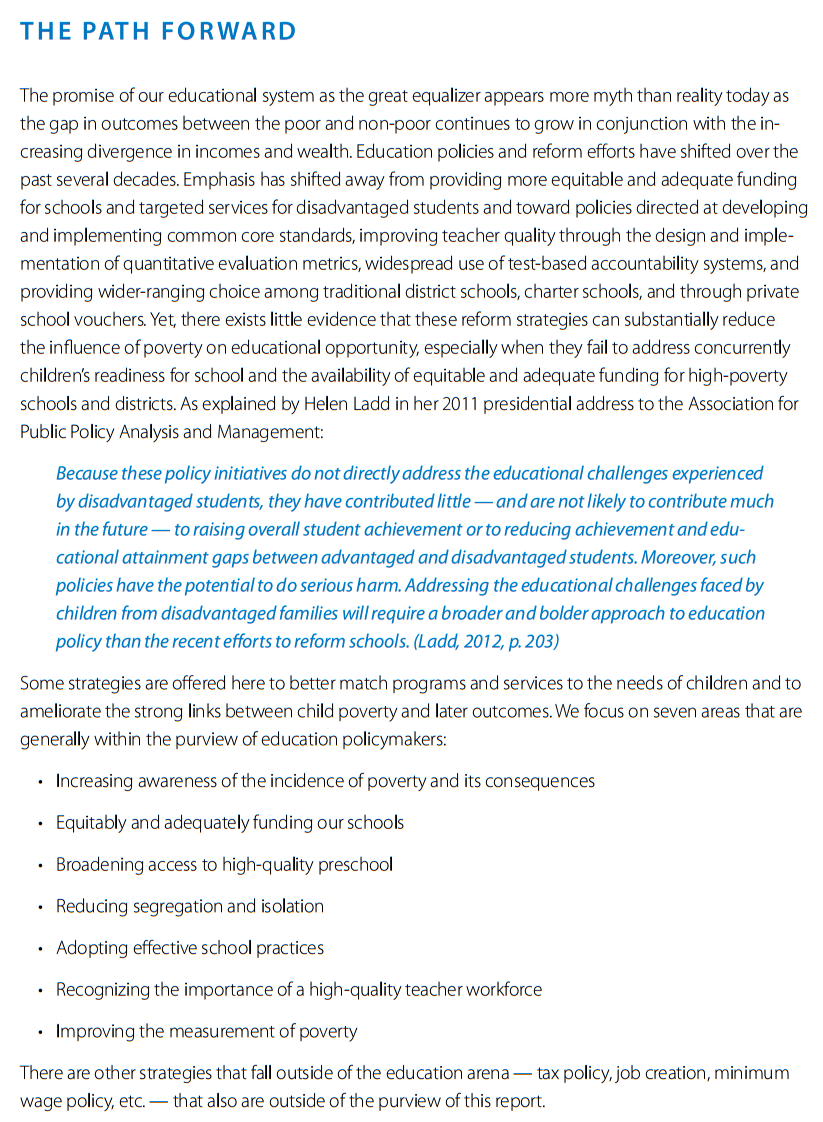 The above programs can work but these need to be implemented seriously with great commitment. Lip service is not enough especially when the government spends much more effort on curriculum reforms and antagonizing teachers. Programs that do not address poverty directly can in fact do harm. One can see that the list of programs that do not help address the problem of poverty in schools matches a lot of the effort that the Department of Education in the Philippines does (Its focus on K+12, performance-based bonuses, and private school vouchers). The Philippines does learn from the United States. The problem is that the country unfortunately copies only what is wrong.