April 26, 2012
Note:  Since the publication of the article, I have been made aware of reactions from DepEd. Although DepEd order no. 31 s.2012 failed to mention trigonometry in enclosure 1, page 3, trigonometry is indeed part of the spiral curriculum for Mathematics in Grade 10 (the old fourth year high school) - as described in a draft of the curriculum made in January. In this draft, the first three years of high school (Grades 7-9) will cover algebra, geometry, and statistics and probability every year in a spiral fashion. This is good news. The bad news is that the article below is not so much about not having trigonometry. The article begins with a reaction (which seems happy) of a teacher after finding out that trigonometry is not part of the curriculum, but the rest talks about why science must be taught in early childhood. DepEd may have missed the science education part which is the central topic of the article but what is more disconcerting is that DepEd missed a deeper side of the article, one which begins with a teacher's statement, and how the Philippine society really views science and scientists.

Science will not be taught as a formal subject in Kindergarten up to Grade II.  Although this has been the practice since the education reform at the beginning of this century, this continued omission in the new K to 12 curriculum should have been revisited and reexamined to see if this was really beneficial to the education of Filipino children.  There are indeed other countries that do not have science as a formal subject in the early years of education.  However, one must carefully consider how science is viewed in general by the society.  The Philippines is one country that is enslaved by superstitions and pre-enlightenment religion.  In 2006, a meeting was held between leading Philippine scientists, the Department of Science and Technology, and members of the House Committee on Science and Technology.  In that meeting, one congressman related the story of how a relative was trying to find a cure for cancer. According to the congressman, even scientists at the National Institutes of Health in the US had given up, but it turned out that the cure for cancer was drinking one's urine early in the morning.  Apparently, according to that congressman, the urine that built up during one's sleep contained the remedy for cancer. And there was no response from any of the attendees of that meeting.

Young children are exposed to this paradigm that is simply void of reason.  Postponing the introduction of science in early childhood education simply reinforces what young children are learning from their homes and in the streets, a world where biases and preconceived notions rule, an environment that does not nurture queries and investigations.  Considering where the students are should have been a great reason to reinstate science as a formal subject in the early years of Philippine education.

There are additional compelling reasons on why science should be taught in the early years.  "Should Science Be Taught in Early Childhood?" by Eschach and Fried provides strong arguments supporting the introduction of science to young children (http://www.jstor.org/stable/40188693, Journal of Science Education and Technology , Vol. 14, No. 3 (Sep., 2005), pp. 315-336). Children are naturally inquisitive. These young minds are ripe for enjoying, observing and thinking about nature. Within a society where adults only have bad memories regarding taking high school chemistry or physics (or trigonometry), exposing the young children to the wonder of science may help in fostering a positive attitude.  The early introduction to nature helps in better understanding of scientific concepts in later years of education.  Science, as opposed to literature, talks directly. Early introduction to scientifically informed language is key to mastery of scientific concepts. Children can reason. Their favorite question is "why?" And since science is unique both as a discipline and as an approach, only a formal subject of science can help develop scientific thinking. The early years offer a great window. Nash, Shore and others have shown from brain research that the brain develops (neurons and their interconnections) very fast in childhood and almost stops at age 10 (grade IV) (Nash, J.M. (1997) Fertile Minds, Time 3:49-56; Shore R. (1997) Rethinking the Brain: New Insights into Early Development, Families and Work Institute, New York). 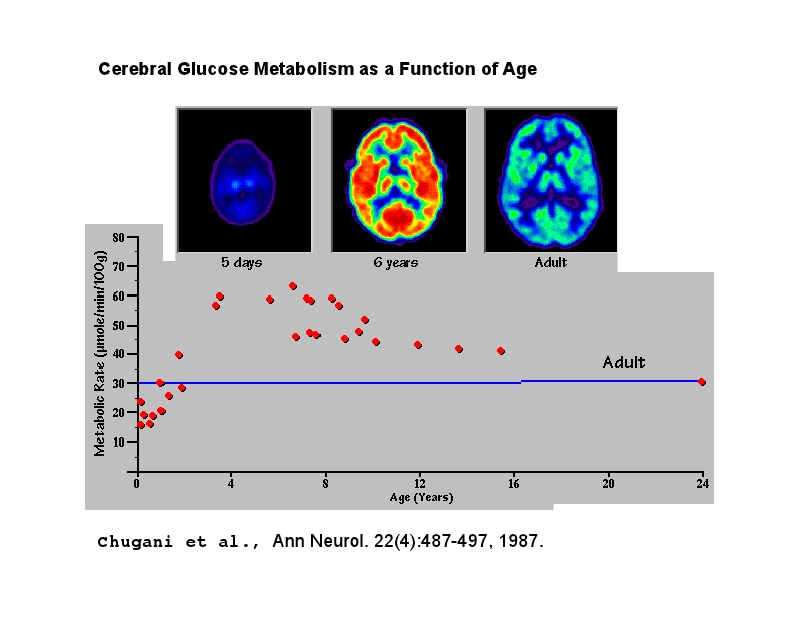 "The above figure shows the changing rates of global brain glucose metabolism from newborn to adulthood. Peak glucose metabolism occurs around 4 years and begins to decline around 9 years. These changes in glucose metabolic rates are linked to the formation of neuronal connections- axons and synapses in the human brain."  (Figure and caption, courtesy of Prof. Onofre de Jesus, University of Wisconsin) Therefore, as early as 4 years of age, it is suggested that children can indeed be provided input for learning.

"The Importance of Teaching and Learning Nature of Science in the Early Childhood Years" (Akerson et al. Journal of Science Education and Technology Volume 20, Number 5 (2011), 537-549) shows why it is important to teach the nature of science to children, and this can be done within a formal subject of science This can not  be achieved with science being thrown as tidbits and integrated in the other subjects, as DepEd has planned for Kindergarten to Grade II. Victoria R. Fu, Ph.D., a Professor of Human Development and Director of the Institute for Learning outlined in her article what should be taught in the early years (http://www.pbs.org/teachers/earlychildhood/articles/learning.html).  What young children learn in the early years have a significant impact on their future. "Native Japanese speakers, for example, typically do not discriminate the “r” from the “l” sounds that are evident to English speakers, and this ability is lost in early childhood because it is not in the speech that they hear." (J.D. Bransford et al., "Mind and Brain", in The Jossey-Bass Reader on the Brain and Learning, John Wiley and Sons, Dec 21, 2007, p. 97)

One important issue in teaching science as a formal subject in kindergarten to Grade II comes from the fact that this is how society demonstrates its view of science and scientists.  What society teaches in the early grades is what society wishes to advertise to its youngest members.

In science, children should practice inquiry skills that lead to higher-order thinking. For example, kindergarten children can be taught the importance of listening fully to the ideas of others—a step toward the development of a critical, questioning attitude. They can be helped in their learning of impulse control, and they can be taught skills needed to generate data, such as observing, recalling, identifying, and measuring. Children should also be taught how to handle and care for plants, for animals, and for one another. Children should learn cognitions in science that build as they progress from one level of schooling to the next. Kindergarten children learn to identify objects with similar characteristics, to compare and match pictures of animals and their offspring, to predict what will happen in some particular case, and to experiment to discover whether their predictions were correct. These are but a few of the intellectual skills that lead to a child’s developing understanding of the larger conceptual organizations around which the K–12 science curriculum is built. Science is taught in the earliest grades, not only because that is where we must begin laying the foundation for conceptual understandings, process skills, and positive attitudes and feelings about science and technology, but also because it is when we must begin stimulating and developing the child’s innate curiosity about the natural environment. By doing science and learning science, children can

The development of students’ interest in science also appears to have a real influence on their career decisions later in life. In 2006, a study appearing in Science offered evidence suggesting that students who reported an interest in science-related careers in eighth grade were two to three times more likely to graduate with a baccalaureate in a science discipline than their peers who were interested in nonscience careers. This study also showed that standardized test performance was related to earning degrees in the physical sciences, but was not significant in determining who earned degrees in the life sciences. In the end, it appears that what we do as teachers to promote interest in science, may have far-reaching influence in our students’ lives.
Science Education